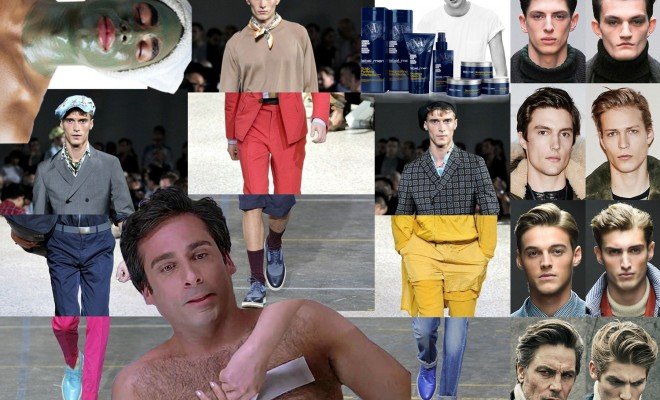 Men and their beauty products. Myth or Legend?

Raise your well-manicured hand and say ‘I’ if you’re a self-proclaimed beauty lover whose last bit of cash at the end of each month goes on a shopping basket full of the latest and supposedly greatest beauty products. Admit it, we all do it, me included. But that’s us ladies, what about the men out there? With the growth of the metrosexual male, are our boyfriends, brothers and guy best friends now being targeted by the beauty industry? And is the stereotype of the tough and powerful masculine guy being lost or is it stronger than ever?

My curiosity struck so I put my lipstick on, started getting nosey and investigated whether the popularity of men’s beauty products is a myth or in fact a legend living large.

The softly softly approach when it comes to guys, we know is a no go. Maybe it’s because they’re used to us women being ‘bossy’ (or so our unfavourable stereotype suggests), or maybe it’s because language theorist, Deborah Tannen suggests that men develop in a society where ‘conversation is often a contest’ for them to always want to be the best and not be known as a push over, maybe this is why those little hints don’t work; it’s clear that men like being told what’s what straight up. I had a peak at a beauty article written in a men’s mag; beauty products written about by men for men? And a pretty obvious thing that jumps up at me is the use of words that tell guys directly what to do, there is a fancy word for this if you want to grow that brain of yours; imperatives; and these prove what the lovely Deborah Tannen says, ‘conversation is a contest’ for men as when being advised on what beauty products are the best for them, they need to be shouted orders at by the sergeant of male beauty, or in this case; the articles author. We know that we need the lay down the law to our guys; be simple and clear. Mitigating is something that us girls do in conversation (btw, mitigating is the fancy dancy way of making something sound nicer and less blunt), and it definitely seems to be something that the guys don’t do; could this be telling us that men and beauty products isn’t quite yet the new craze in town because they still need to be told what they need to buy? Men sometimes come across as mysterious creatures that don’t seem to be part of the same species as us at all; first they’re too ‘manly’ to even be linked to the word beauty and now they’re being targeted by the beauty industry; watch out people, it looks like stereotypes are being thrown out the window.

Stereotypes. They’re everywhere and by heck do we know it! Blondes are all apparently ditsy, all redheads somehow appear to be ginger, it’s said that women can’t do anything as well as a man can apart from being a housewife, and all men are for some reason considered to be too manly to have any part in the beauty industry. But hold on folks, I think the times are changing. We’re well aware that we’re living in a multicultural society that’s developing more and more with every app we download, and so it’s no surprise that this new ‘metrosexual male’ who’s also interested in their appearance is on the rise and more and more obvious by us; guy-liner, hello!

However, we may not quite be there yet with the semantic field of a men’s beauty article proving; the semantic field is basically a metaphorical field where  there are a bunch words and phrases used in the writing that are related with the same theme (don’t thank me now, I’m just beginning to fill up that brain of yours); words that we often consider to be masculine and typically only related to men, eurgh, are often included making the products sound more manly to the male audience, maybe this is so that guys out there don’t feel too feminine reading about beauty products and maybe it’s because this big, strong and powerful stereotype of men is still very much surrounding us.

However (yes, there is an however here), there is some defying of those typically typical stereotypes with men and beauty products as quite obviously; men are being targeted.

Big word time: synesthetic personalisation (where the author creates a false relationship between reader and writer); is a common technique you’ll now notice in advertising as it makes us feel we can trust what is being said more, with the word ‘our’ and ‘we’ being used quite a few times in the men’s beauty article makes us think that men are in this new beauty regime together. They’re apparently new to this exfoliating and moisturising malarkey, and so to give confidence to the men readers who maybe aren’t quite sure on this whole new beauty thing for them, the writer makes it sound as if (queue high school musical music) they’re all in this together.

As this new phenomenon seems to be fairly new; men and beauty products, it seems as if the guys out there still aren’t so sure; suggested by the men’s beauty article I got my specs on to read, but I’m not convinced that the metrosexual male doesn’t exist, times are changing girlies and soon I’m sure you’ll more men in Boots topping up on their moisturisers and fancy shampoos as stereotypes of masculinity that state that beauty is all about being feminine is now all just tosh. Men are the new target for the beauty industry and so what? They need to care for their beards and hair as much as we care for our hair free legs and non-split ended hair. Men and their beauty products is definitely legend, there’s no myth here.

Livi
Next Story → Nailed It!